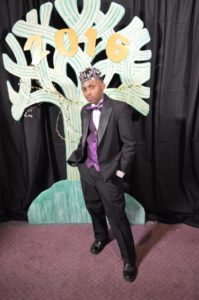 What a spring it was for 19 year old EBCLO client Julius.  First he was MetWest High School’s Prom King. Then he earned his high school diploma, graduating with a 3.7 GPA. Having entered the school with less than a 2.0, his grit and great sense of humor, not to mention the incredible support of his school and his foster family, propelled Julius past the finish line.

Julius didn’t spend his entire high school career in foster care. Rather, two years ago when his caregiver was evicted and no one in his family would take him in, Julius found his own family. He describes that his former pediatrician and her family “had a soft spot for me, I guess.” With the help of EBCLO, the relationship was made official, but the support of Julius’ new family came naturally. “If I needed something, I knew I could ask them. . . even if it was ridiculous,” says Julius.

Two years later this delightful young man has accomplished a lot for himself-in addition to being Prom King and a high school graduate, he has a supportive family, a new job and plans to attend community college in the fall to earn a trade like auto mechanics or carpentry. He also has a new name thanks to his EBCLO attorney, Liz Aleman. Julius had wanted his name changed for at least 8 years, and Ms. Aleman wasted no time. Julius was able to enter adulthood officially using the name he’d informally used for so long. What’s Julius’ advice for other kids in the system? “Persevere through any situation even if you think you won’t make it out. You have to keep going because you never know what’s on the other side. And accept yourself; learn to love yourself. You have to be comfortable with who you are and have confidence.”